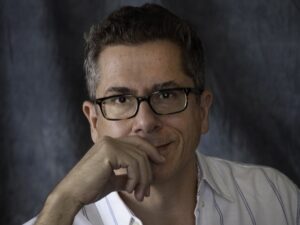 DAVID REGAL is behind magic seen by millions of people around the globe. He was the head writer and co-executive producer of TV’s The Carbonaro Effect, where, over the course of six years, he created and collaborated on hundreds of original effects. He has written for, and designed effects for, performers seen on television, Vegas showrooms, and Broadway stages. His television writing credits range from kid shows (Rugrats) to sitcoms (Everybody Loves Raymond) and he is responsible for some of the best-selling tricks (sudden deck, clarity box) and instructional magic books (interpreting Magic, Approaching Magic, Constant Fooling, etc) of his generation. In addition, he is a two-time Magic Castle Lecturer of the Year and the recipient of the Creative Fellowship awarded by the Academy of Magical Arts.

David’s Lecture
The lecture will be drawn primarily from items in his best-selling book “Interpreting Magic” as well as some special material he brings only to lectures. David will also open the floor to questions about what goes into producing the hit TV series The Carbonaro Effect.

You can register for this lecture for only EUR 10,00! Simply buy a ticket and we will send you a link to register your ticket for the zoom session. The lecture will be held at 20.00 (8 PM) Amsterdam time at the 20th of May April 2021.

Tickets can be reserved by CLICKING HERE and add the item to your cart.!

Categories
More info
In our shop…