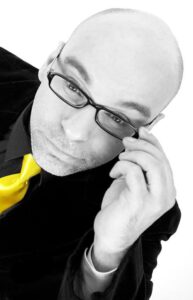 PATRIK is a born entertainer, he can turn even the most mediocre variation of Marlo into something special, without ever letting his talent become a crutch. Spending most of his life (outside the hours of sleep) creating magic effects, he was able to develop entirely original scenic and micro magic acts, composed of material capable of fooling magicians, laymen, and quite possibly some computers…
…Until now he has only been published sporadically, his material has appeared in a few magazines here and there, such; Syzygy, Quintessence, Genii, Magic, Mind over Magic, Arcane, and without forgetting a first appearance on DVD entitled Metal Bending, The real work, which has become a reference tool on the subject. This was followed by the Mind Stunts and Mind Stunts 2.0 dvd duo.
Renowned magician David Acer is the author of his very first book, MIND STUNT’S, written for the magician community. This controversial work has already received several praises from big names in the field.
So here is a rare opportunity to explore the magic of Patrik Kuffs; from card magic, to stage magic, to mentalism, and more!

The conference includes a mix of his “best” ideas and several new routines. The great strengths of the KUFFS conference are the great simplicity of its effects, as well as its modern approach to the well-kept classics of mentalism. A great moment of happiness to live with an artist that you don’t meet every day…

During his Kufférence you will be able to see:

Tickets can be reserved by CLICKING HERE and add the item to your cart.!